Pooran Singh goes home after 63 years in our care

In September of 2009, in the week that Guyetts Funerals were moving from Timor Street, where we had been for nearly 50 years to our new premises in East Warrnambool, Mr Len Kenna and Ms Crystal Jordan arrived on our doorstep and inquired of Alice Guyett about some ashes from 1947.

Guyetts Funerals did 179 funerals in 1947 and only 1 was a cremation. Alice told Len that he was seeking Pooran Singh. Len was staggered that Alice would know. Alice then told him of her family’s wish to take Pooran Singh to the Ganges to afford him the respect that he deserved.

Len, who we then found out was an historian with an interest in Indian hawkers, spoke to his friend, Ms Manpreet Singh of SBS Punjabi Radio, about what he and Crystal had found from the records that Guyetts had placed on loan with the Warrnambool Historical Society. Manpreet was so taken by the story that a funeral firm would hold a person’s ashes for 63 years in the hope of fulfilling his wish that she decided to pursue the story in greater depth.

It must be remembered that at this time in Victoria, due to the senseless acts of a few, that the news stories emanating from Australia and being featured in the Indian press were less than complimentary to Australia and our attitude to Indian people. This find by Len and Crystal would turn much of this negative publicity on its head.

Manpreet ran with the story. She visited Warrnambool and interviewed Alice and Brian Guyett and she meticulously prepared her story for her radio show on SBS Punjabi Radio that was broadcast directly into India. The reactions to her broadcast were nothing short of amazing. People in India and Australians of Indian origin were extremely touched by the story and sought to know more.

The story went from large in the Indian community, both in India and Australia, to nearly assuming a life of its own, when Mr Kapil Dev, Indian cricket legend and successful businessman and a person so revered in India, contacted Manpreet, whom he had known for twenty years, and offered to assist in the repatriation of the ashes to India.

At this time Pooran Singh’s family members were not aware of the existence of the ashes. They became aware of the story when an Indian film crew tracked them down in their village in the Punjab. The current family home has an inscription cast into the front of the building: Pooran Singh- Australia. The interest in India led to Mr. Harmel Uppal, Pooran Singh’s great nephew who lived in Wolverhampton, UK to know of the story. Harmel was given the great honour by his family of collecting the ashes from Warrnambool and taking them to the Ganges for immersion.

Who was Pooran Singh Ji? Pooran Singh Ji came to Australia in 1899 as a single man and became a hawker around the Western District of Victoria. It would have been a hard life moving from place to place in a horse drawn covered wagon, sleeping amongst the wares in all weather conditions. During his lifetime Pooran Singh was able to amass a respectable estate. With his legacy, his family in India was able to purchase land and to build houses. He provided opportunities for his family in India of which they probably could have only dreamed. He passed into the care of the Guyett family in June of 1947. We waited to receive instructions for the repatriation of his ashes. Those instructions never came.

In our family folklore passed from Alice’s and Brian’s great uncle Bert Guyett, to Alice’s and Brian’s father, Jack Guyett, the consensus was that during the Partition in India of 1947, which was a tumultuous time in Indian history, the person giving the instructions may not have survived, as we heard no more in respect to Pooran Singh Ji. Just before he died in 1986, Jack Guyett told Alice
that we needed to honour the wishes of Pooran Singh Ji. Alice promised her father that when she could, she would do so.

In the late 1980s, Pooran Singh’s ashes were relocated to the Warrnambool Cemetery and placed in a prominent position in the niche wall, so as to have a memorial for him until he could be repatriated to India. It was at this resting place on Sunday July 25th, 2010 that a ceremony took place to mark Pooran Singh’s life and to hand over the ashes to his family for their return to India.

The event attracted media from around Australia and internationally. The Sikh community hosted a lunch for the citizens of Warrnambool, as about 300 Sikhs from the Blackburn Sangat had come to the city for the event. The ceremony was a moving experience for all. Speeches were made on behalf of the City of Warrnambool, by the Mayor, Cr Michael Neoh, then the family of Pooran Singh by Mr Harmel Uppal and finally Brian did the honours for the Guyett Family. Mr Dev spoke of his awe of someone respecting a person’s wishes for this length of time and he stressed how honoured he was to be a part of the handover. Mrs Avis Quarrell read a poem about Pooran Singh, whom she had known as a child. She still had in her possession a shell necklace that Pooran Singh had made for her mother. A Sikh priest led us all in prayer.

The most poignant and moving moment was when the ashes of Pooran Singh Ji were taken from the wall and placed in the hands of Mr Harmel Uppal by Alice.

He clutched them close to his heart understanding the significance to him and his family of the moment.

Over the next few days, Harmel, Kapil Dev, Manpreet, Len and Crystal travelled to India to Pooran Singh’s home village. The media scrum that awaited them in Delhi was of rock star proportions as Kapil Dev was in the group. Over the next few days everyone except Kapil Dev travelled to the village and then to the River Ganges. Harmel found that he was developing such a bond with the ashes that he was reticent to finally let them go into the Ganges. The whole experience had become a part of him and had reconnected him with a legend of his own family in a spiritual way that had surprised him, but at the same time it had delighted him. Harmel and Manpreet kept us informed of the events in India as they were happening.

The Guyett Funerals motto when the business was established in 1905 was to always remember 5 words: With Dignity, Reverence and Service. We had always treated Pooran Singh Ji and his memory with dignity. We had always maintained our reverence for his wishes and on July 25th, 2010 we completed our service to him by releasing him to his family and to Mr Dev.

Postscript:
Since the ashes have been released into the Ganges a number of events have transpired: 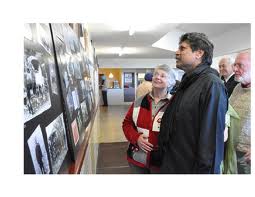